THE Punjab government’s attempt to set world record of singing national anthem by maximum people has been postponed due to potential security threat. The provincial government sources revealed that there was red alert threat to easy and soft target of school and college children at the Punjab University New Campus venue.

New dates for the attempt will be announced later. The threat has wasted millions of rupees spent on the development of the venue and arrangements. 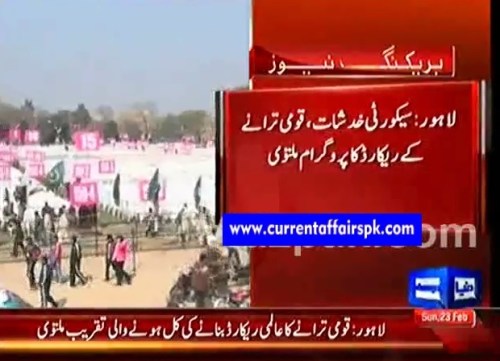 Around 200,000 people from all walks of life were to gather at the venue to regain the world record of national anthem singing by maximum number of people. The activity was part of the Punjab Youth Festival 2021 and was an attempt to get back the record set by the Punjab youth in the 2012 at National Hockey Stadium. But the record was taken away by India last year when they assembled around 121,653 people singing their national anthem.

Excitement of the people who had to participate in the event was quite berserk. On Sunday, Provincial Minister for Sports, Education and Youth Affairs Rana Mashhood Ahmed and

Punjab Sports Director General Usman Anwar inspected the site. The organizers say that 175,000 chairs were placed in the whole arena. Prime Minister Mian Nawaz Sharif was likely to attend the event as the guest of honour.

The security arrangements made by the city police had been changed entirely by the intelligence agencies on Sunday night and no police official present on the spot revealed the exact security plan probably to avoid any potential threat.

Apart from the government officials, significantly around 50,000 school students, 50,000 college and university students and 70,000 female students were to be part of this ceremony. Attempt to set another record of waving national flag was to be made.

To meet the requirement of Guinness World Records, the participants will have to wave the flags from seven to 10 minutes.