The Election Commission of Pakistan (ECP) launched a short message service for the ease of voters to check their voter registration, ward number and also the polling station. Now every citizen of Pakistan who is registered with ECP can check his or vote and polling station by sitting anywhere in the world. This is world largest quick short message service. what is deemed as the world’s biggest voters’ Short Message Service (SMS) to facilitate 85 million voters throughout the country? According to an ECP official, the service could be used by sending the Computerised National Identity Card (CNIC) number on 8300. In response, the voter would be asked for voting details like CNIC number, electoral area, block code, Tehsil/District and Serial Number.

The service would help to the local public of any constituency to check the status of their registration in electoral rolls conveniently, anytime and anywhere, from across Pakistan, the ECP official said. The people would be able to verify their registration and particulars in the voter-lists via SMS by paying just Rs 2 per message. The service has been launched in joint with the National Database and Registration Authority (NADRA) to help registered voters check the condition of their votes and other detail regard registration. 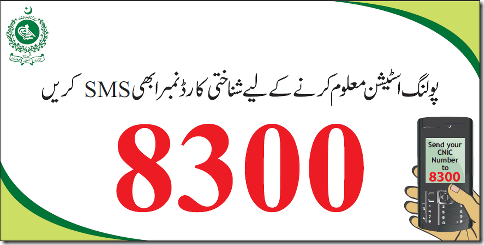 When a voter enters in the polling station to cast his/her vote their must he has the complete detail of registered where vote number, ward number, and polling station name. If you failed to provide your details to polling station staff then you will not be allowed to cast vote at any cost.